Swallow Falls (Rhaeadr Ewynnol in Welsh [I think pronounced “HRAYE-uh-dur ew-UHN-nol]) was definitely one of the more famous waterfalls we encountered while we were touring Wales.

Not only did this waterfall appear on a Rick Steves DVD

(which we watched as part of our pre-trip research), but it also featured prominently on several guidebooks as well as other sources in the literature.

So there was a lot of anticipation on our part to visit this falls.

That said, when we did get a chance to lay our own eyes on the Swallow Falls, we were treated to a dazzling display of a rivuleted cascade.

Here, the Afon Llugwy (pronounced like “av-on HTHLIG-wee” or Llugwy River) dropped some 15m or so in an upper drop before cascading down smaller tiers further downstream.

Something that we noticed throughout Wales was that most of the place names had equivalent Welsh names.

In the case of Swallow Falls, its currently accepted Welsh name was Rhaeadr Ewynnol, which was said to mean “Foaming Waterfall”.

However, I learned later that even this Welsh pronunciation might have been a bastardization of “Y Wennol”, which actually meant “the swallow”.

The association with the bird may have something to do with early visitors who thought the waterfall resembled the patterns of feathers on the back of a swallow.

I don’t think the machine gave change so we might have lost out based on how much change we had on us.

In any case, once we were on the other side, we quickly walked a short, well-developed and slightly downhill path to the main upper lookout of the waterfall.

This lookout yielded the picture you see at the top of this page.

Then, we then continued down some steps leading closer to the Llugwy River.

One branch of the lower path went back towards the Swallow Falls for a slightly different and more frontal view of it.

The other path continued further down more steps eventually leading to a lookout almost jutting out onto the Afon Llugwy itself.

From down there, we were able to look upstream towards a lower cascade as well as a partial view of the upper main drop of Swallow Falls.

Looking further downstream, we could see there were coins at the bottom of a calm part of the river suggesting that people have tossed them for one reason or another.

We were also mesmerized by what appeared to be tiny vortices or whirlpools.

Basically, the turbulence of the river just downstream of the falls would interact with the rocks and riverbanks and actually create a spinning motion as it the water would continue further downstream.

After getting our fill of this spot, we then went back up through the turnstile and back to the parked car.

We noticed that there was somebody about to open up a ticket booth next to the turnstile so perhaps he was there to collect the fees in person.

Overall, we had spent about 25 minutes at the Swallow Falls.

Fitting in a Swallow Falls Visit after having a flat tyre

However, it would turn out that our visit was a bit on the rushed side thanks to some unforeseen events concerning a flat tyre on our rental car.

This resulted in some accompanying fallout from coordinating with the roadside help people to get the issue fixed without losing an entire day while on holiday.

This was actually a bone of contention of mine regarding rental cars unfit for hire due to bald tyres.

We’ve had multiple occasions where this has happened, but it ultimately comes down to a horrible dilemma at the time of hire.

We could either put up with the uncertainty of having a replacement car before driving off from the rental car lot, or we could cross our fingers and hope to avoid losing precious time in an incident like this.

Needless to say, we chose the latter, and we had to pay for this in one way or another (whether it’s time, or money, or both).

Route to this Waterfall

We stayed at Conwy so we’ll describe our driving route from there to Swallow Falls.

Leaving Conwy, we drove east on the Conwy Road (A547) then we turned right and went by three roundabouts as we headed towards Betws-y-Coed (pronounced “BET-us-uh-KOY-eed”).

Signs would point the way to the correct exit to take at the roundabouts.

Once we got onto the A470, we headed south for about 15 miles (passing through the town of Llanrwst) before turning right onto the A5.

Going west for about 2.7 miles through the town of Betws-y-Coed, we would eventually get to the Swallow Falls Hotel, where there was a spacious pay and display car park.

Apparently since we showed up somewhat early enough, we actually saw people were parking in a limited space for free on the other side of the A5 at a layby, and so we ended up doing the same.

Overall, this drive took us on the order of 45 minutes, especially in light of the traffic volume the A470 tended to get plus there were very few opportunities to safely pass slower moving vehicles.

Alternately, a less-busier road (albeit narrower) to take from Conwy would be to go south on the B5106 road for 3.5 miles towards Tyn-y-Groes.

Then, we’d take the single-lane road east to get back onto the A470 going south.

We could also have chosen to stay on the B5106 road further south to Llanrwst (11.3 miles).

Find A Place To Stay

Checking out the falls from two different lookouts

Auto Europe Car Rental Review: Why We Book With Them

What Is Rental Car Insurance Coverage? Is It Necessary?

Featured Images and Nearby Attractions

No users have replied to the content on this page

Share your thoughts about what you've read on this page

Visitor Reviews of this Waterfall: 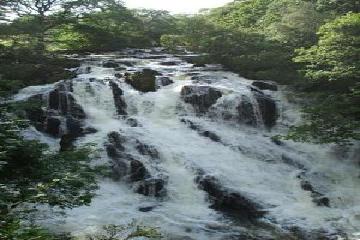 Swallow Falls (Wales UK) November 21, 2012 1:58 pm by Ruth Williams - Probably the most photographed waterfall in the Snowdonia National Park of North Wales, Swallow Falls has been a popular tourist spot for over a hundred years. The Afon Llugwy river has carved its way through the Gwydyr Forest and tumbles over the boulders in three tiers to create Swallow Falls or Rhaeadr Ewynnol as it… ...Read More

Have you been to a waterfall? Submit a write-up/review and share your experiences or impressions

The Waterfaller Newsletter is where we curate the wealth of information on the World of Waterfalls website and deliver it to you in bite-sized chunks in your email inbox. You'll also get exclusive content like...

We are passionate waterfall lovers eager to share our experiences chasing waterfalls around the world! [more]