Aber Falls (Rhaeadr Fawr in Welsh) for some reason took me by surprise with its size and its settings when I finally had a chance to visit it in person.

Based on my pre-trip research, I had mistakenly thought I was pursuing some modestly-sized waterfall that happened to be worth visiting as a convenience.

Since I was staying in Conwy and the falls was near Abergwyngregyn, I only had to drive a short distance west to do this hike.

In any case, perhaps the photos in the literature left me with the impression that the falls was smaller than it turned out to be.

Even the literature at the time (I visited in early September 2014) claimed that the Afon Goch (Red River?) was said to drop about 120ft (37m).

However, in reality, it Aber Falls was way taller than that, which you can see in the photo above.

So not only were my preconceptions off base, but the impressive mountains and cliffs surrounding the Aber Falls accentuated with neighbouring trees really made this place a surprisingly pleasant experience.

Needless to say, this moral of this story is that you always need to experience things physically and in person because you never really get the whole picture just by what you preconceive beforehand.

In addition to the Aber Falls itself, there was also another companion waterfall that I encountered on the hike.

This other waterfall was called Rhaeadr Fach (pronounced “HRHYE-uh-dur VAHKH”) in Welsh.

It actually seemed taller than Aber Falls, but it had much thinner flow.

In order to reach this waterfall, I had to extend the hike beyond Aber Falls, which I’ll get into in the hike description below.

The Hike to Aber Falls and Rhaeadr Fach

The overall hike I took to get to the foot of both Aber Falls and Rhaeadr Fach was roughly 3.5 miles total.

It was a little over 1.25 miles to get from the nearest car park (see directions below) to Aber Falls.

Then, it was an additional 0.5 miles to get from Aber Falls to Rhaeadr Fach.

I ended up spending roughly 2 hours for the entire hike, but I really didn’t have much choice to linger longer because I had gotten a late start.

Thus, the authorities would close the gate leading to the upper car park by 7pm, which didn’t leave me much time to avoid getting locked in!

That said, I could have walked up from the much more accessible lower car park, which didn’t have the threat of being locked in if I happened to be out later than expected.

However, that car park would have forced me to hike an additional 0.5 miles round trip (which in hindsight might not have made that much difference anyways).

From the upper car park, I followed a well-signed path that took me across a creek, then ascended into some sheep pastures after veering right at the first junction past the bridge.

At the next junction, I rejoined the main trail, which was where the trail from the lower car park would have come from.

From there, I was on a very wide path that looked like local farm vehicles could drive it.

Plus, there happened to be many sheep around as apparently I had shown up at a time when sheep herders were rounding them up.

A short distance past what turned out to be a visitor centre and exhibit, I then encountered another signposted junction.

The left branch was very narrow and led steeply uphill into a forest, which was labeled as the “rough” path.

I decided to stay on the right branch, which remained on the wide open but still ascending road through more sheep pastures.

A few minutes past the last of the sheep fences that I would encounter on this stretch, I started to notice a very tall but thin waterfall way in the distance towards my right.

This waterfall turned out to be Rhaeadr Fach.

Continuing on a few minutes more, I would then start to see Aber Falls in the distance towering above the trees before me.

The terrain remained a mix of sheep pastures along with woods.

After passing by what appeared to be a yard with some horses, I’d ultimately get to the base of Aber Falls after about an hour since I had gotten started on the hike.

I noticed that the closer to the falls I had gotten, the smaller Aber Falls started to appear.

This was because its uppermost tiers started to be hidden by cliffs, and the lower parts of the drop started to be covered by the trees before me.

Continuing past the next junction (where the right branch crossed a bridge over Afon Goch), I then made it past the trees and right up to the base of the falls.

From this vantage point, I got photos very similar to what was already in the literature (i.e. how the falls might have appeared smaller than they really were).

Based on these observations, I started to wonder whether the 120ft drop only counted this main tier as it seemed to be discounting the rest of the falls.

In any case, after having my fill of this side of the river, I then went to the other side via a path that I didn’t take earlier.

From there, I got another look at the impressive Aber Falls from its base.

Then, when I had my fill of Aber Falls, I continued past a gate onto what seemed to be a much narrower, rockier, muddier, and more overgrown trail.

Given how dramatically different the trail conditions were, it was pretty clear to me that this section of the track was managed by someone different.

Still, roughly less than 10 minutes later, I was finally at the footbridge crossing the smaller stream at the base of Rhaeadr Fach.

Just like with Rhaeadr Fawr, Rhaeadr Fach looked a bit smaller than when I saw it earlier in the hike while in the sheep pastures.

But it was still impressive as I could see birds circling the cliffs surrounding the top of the falls.

This attested to how high up those birds were flying, which also suggested that Rhaeadr Fach was indeed a tall cascade.

Looking downhill from where I was standing, I could see the expanse of woodland scenery covering much of the Aber Valley around me.

Way in the distance, I could catch glimpses of the faint Irish Sea between the mountains.

So once I had my fill of Rhaeadr Fach, this was my turnaround point so I would head back the way I came.

The return hike only took me about 40 minutes as it was a mostly downhill walk.

And for the record, I did make it back to the car park in time (there was actually another car parked there later than me) so I wouldn’t be locked in and stranded here.

Perhaps I should have anticipated the magnitude the Aber Falls once I figured out the meaning behind its Welsh name.

In Welsh, this waterfall is called Rhaeadr Fawr, which would be pronounced “HRHYE-uh-dur VAHW-ur”.

However, according to my Welsh dictionary, the word fawr meant “not much”, which didn’t seem to make sense.

Then, when I looked further on in the dictionary, I saw that the word mawr meant “big”.

So this could have been a case of a mutation where the Welsh language was prone to having changes in the initial letter of some words depending on a myriad of factors including context.

Thus, given the mutation, I believe the Welsh name of Aber Falls would translate to mean “big waterfall”.

And if this translation is correct, it would explain why I shouldn’t have been so surprised in the first place!

In addition, regarding the bonus waterfall Rhaeadr Fach, I could see that fach could very well be a mutation of the word bach meaning “small”.

Thus, Rhaeadr Fach could very well mean the small waterfall even though it really wasn’t a slouch in its own right.

Route to this Waterfall

We stayed at Conwy so we’ll describe our driving route from there to Aber Falls.

Leaving Conwy, I went through the town center towards its north end, then I continued going northwest on Bangor Road (A547).

After a little over a mile, I got onto the A55 motorway and followed it for roughly 8 miles west to the signposted exit for Abergwyngregyn.

Once I was off the motorway, I continued to go straight at a four-way intersection then onto a narrow road that would take me about 0.7 miles to the Lower Car Park.

This car park was owned by the National Park Authority with a pay and display charge of 2 pounds for the day.

Technically, I could have started from here, and the overall hike would only be roughly 0.5 miles longer round trip than what I ended up doing.

However, I decided to keep going past the bridge, then turned right at the next junction to continue the last 0.2 miles to the Upper Car Park.

This car park was owned by the Forestry Commission, but there was the same pay and display car park charge of 2 pounds as well.

This car park had picnic tables and a toilet.

Overall, this entire drive took me about 15 minutes.

Find A Place To Stay

Auto Europe Car Rental Review: Why We Book With Them

What Is Rental Car Insurance Coverage? Is It Necessary?

Featured Images and Nearby Attractions

No users have replied to the content on this page

Share your thoughts about what you've read on this page

Visitor Reviews of this Waterfall: 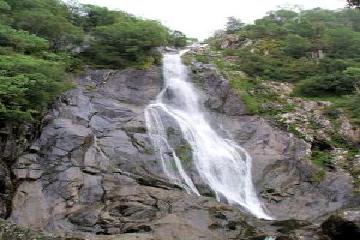 Aber Falls (North Wales UK) October 14, 2012 5:55 pm by Ruth Williams - It is approximately a 3mile round walk to Aber Falls (Rhaeadr Fawr in Welsh). The path which leads up to the head of the Aber Valley is well maintained and not difficult. On the way there are panels and a small exhibition explaining the ecology and history of the valley which has been inhabited since… ...Read More

Have you been to a waterfall? Submit a write-up/review and share your experiences or impressions

The Waterfaller Newsletter is where we curate the wealth of information on the World of Waterfalls website and deliver it to you in bite-sized chunks in your email inbox. You'll also get exclusive content like...

We are passionate waterfall lovers eager to share our experiences chasing waterfalls around the world! [more]